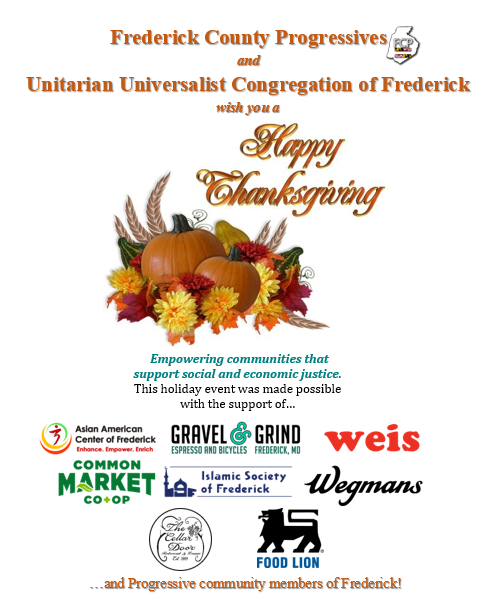 First, a huge thanks to all our partners, donor, and volunteers for Frederick Turkey Drive 2017.

Our initial goal was to serve 100 meals to the community, between those served at the Unitarian Universalist Congregation of Frederick and those delivered by volunteers. We knew going into planning that, on our own, we could not meet that goal, but had faith that Frederick's progressive community would rise to the occasion and you showed that our faith was well founded.

When we decided that we wanted to try organizing a community food drive around the Thanksgiving holiday, we wanted to do something a little different. Rather than simply collect food for families in need, we wanted to give something more, a glimpse of what Frederick is and can be; a Community that shows, not just in words but in actions, that all are welcome here. The meals mean a lot, but the more important part was to give members of the community from different walks of life the chance to interact and show our shared values and humanity. Taking our view of the importance of intersectionality out of the theoretical and into reality.

Dozens of volunteers came out to help with cooking, prepping, & driving and even more said they would like to help next year! Though many of you didn't see her, Frederick City Alderwoman Donna Kuzemchak was there on Wednesday helping with cooking and cleaning. Congressional Candidate for District 6, Andrew Duck, also came by to deliver meals. We also received a lot of help connecting with community members from our friends at the Asian American Center of Frederick, the Islamic Society of Frederick, Frederick Memorial Hospital, and Centennial United Methodist.

It is with no exaggeration at all that we say, we could not have done this with out all our amazing volunteers and donors!

Thanks to the outpouring of support the number of meals we served was actually closer to 180, and about 140 or those went out for delivery between 12:30 and 1:15pm! As an added bonus, we planned for overage to make sure that we couldn't end up in a position where we had to turn anyone away, and so we were able to take enough boxed meals, turkey, & stuffing to donate to Frederick Community Action Agency for around another 70 or so meals on Friday, along with other extra supplies!

Many of the recipients of the meals delivered were single parent families struggling to make ends meet, those recovering from recent surgery or injury, our Respected Seniors who may have trouble cooking such a meal or were alone for the holiday, and recent immigrant families who are trying to acclimate to our culture and traditions. For some of the latter, this was the first time they were truly welcomed to participate in an American holiday, which means a lot in a time when so many of our new neighbors are being pushed away due to the bigoted attitudes and policies on display both nationally and unfortunately, in some cases, locally.

We are planning more events and actions in the coming year to show our Vision through Action, to create the world that we want to live in by lifting up all people in our own community. With the State Legislative session coming up, as well as State and County Elections, and in creating change with the new City Leadership, there's a lot of work to be done!

We can't do it alone, but you've shown what we can accomplish together, and we hope to have your support again in the future! Like the Facebook page and stay tuned for more!